For an entrepreneur who has met a lot of financial hurdles, seeing his/her business grow might be the sweetest success. But for Adela Padilla-Rivadeneira, owner of the sole banana chips manufacturer in Marinduque, being able to provide employment for fellow community members is the greatest.

It was in 1996 when the Rivadeneira family began their business of homemade banana chips. That time, it was only Adela who cooks the saba banana. Once ready, she would sell it to school canteens at nearby communities.

Her first loan amounts to PhP 2,000, which she used to acquire raw materials and cooking equipment.

“Ever since I became a member of CARD, my product became known to people,” narrated Adela.

When Adela paid a visit to San Pablo in 2009, she was invited by CARD to display her products.

“I brought many products with me for an event at Araw ng San Pablo. That day, I had the chance to introduce our banana chips to people in the industry and the general public,” said Adela.

This, said Adela, ignited business partnership with Mga Likha ni Inay and CARD-Business Development Foundation Inc. With the assistance of the two institutions, Adela was sent to trainings for entrepreneurs. Among these are a training on packaging organized by CARD-BDSFI.

As with any other businesses, the Rivadeneira’s business met challenges along the way. One is when a typhoon wreaked havoc on their province. This left their plantations in shambles.

“There was nothing left to do. There were no available bananas for production. I had an existing loan that time that needs to be paid. We had to continue our business. But where do we get the raw materials we need?” shared Adela.

And so, Adela sought the help of the office of Department of Agriculture in their region. She asked where they could avail of the needed bananas.

“We immediately went to Sariaya, Quezon to purchase raw materials. This had been a practice for a year. Fortunately, we got through this obstacle,” reflected Adela.

This experience pushed the family to acquire a land in Quezon where they can build their banana plantation. They had also hired farmers to tend the plantation. With this, export from Marinduque to nearby islands will no longer be a problem whenever a typhoon strikes. Moreover, a plantation would be beneficial to them in case they plan to expand their family business.

Now, the Rivadeneira’s family business has been known as 3 Sisters’ Homemade Banana Chips. It is one of the leading banana chips in the country, and has regular buyers from international markets.

The success of their business also means expansion in their workplace. From family members working, they have expanded to 20 dedicated employees.

“Here in our province, our business has helped a lot of farmers,” said Adela.

For Adela and her family, it is a success that no money can ever buy.

“We plant seeds not only for our business but for the welfare of our community,” ended Adela. 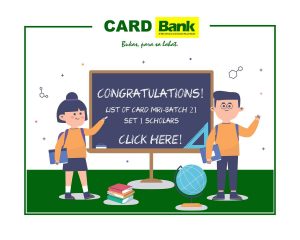